Have you ever heard of the trading game? It’s a game where you start with some small item and you try to trade it with other people for increasingly better items. There are a few success stories, such as the person who manage to get a house after starting with a paperclip.

“We can do that too,” my sister and I thought. At least, we’ll have fun trying and we’ll see where we end up. And what better place to start than the Flea Markets that are so numerous during King’s Day? People are already selling various items. They would probably not mind selling our item instead of one of their own.

So, last Saturday, the two of us headed out to Amsterdam, bringing along a set of IKEA floor protection pads. 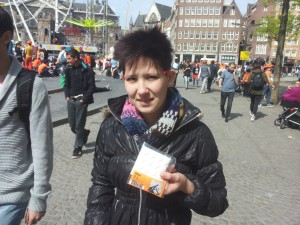 It may seem like a strange starting item, but there’s more reason behind it than you’d think (and the people who know us very well will probably have seen these pads before once or twice). We were a little bit afraid it might be slightly tricky to trade away, because, well, they’re not something you pick up that often.

But, luckily, we came across a woman who was kind enough to trade us for a wall tile reading “Love is in the air… Jammer genoeg kan ik niet vliegen” (Too bad I can’t fly). 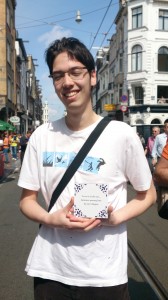 Easy enough to trade away, don’t you think? Turns out it was, as not much later, we managed to get a tea light holder for it. 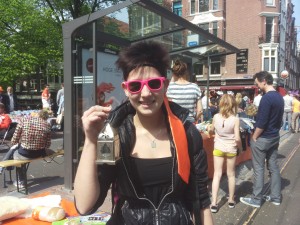 Contrary to what we expected, most of the stalls we encountered were just shops that continued to sell their wares outside, with very few private people just selling their useless stuff. Maybe it’s because we didn’t really know where to look, or maybe we just had wrong expectations, but in the end, we didn’t get that far. We were able to trade the tea light holder for a domino set in the end, but that’s where our trading adventure ended on this day. 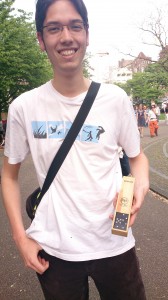 But it was a good day nevertheless. The weather was nice, there was a lot to be seen and we had fun, which is what matters in the end.

And I guess there’s some things we learned from this. Like how we should look into where exactly we should be to trade, or that most people will pack up and leave around four. And that neither of us really knows how to play domino.

All in all,  a good first King’s Day. Onto the next!