Sometime around November, Lena and I realized we had never been on a vacation together. Sure, we went to Galacon, but that was also partly working as volunteers. So we did what any sensible couple would do: we bid on a vacation auction. The result: a three-day trip to Hamburg, including a stay at a hotel.

After some minor hassle getting the right date (we planned on going for a weekend, but were only allowed to go in a midweek), we flew to Hamburg for our first vacation together.

It was fun! A friend from the Galacon volunteer team gave us some advice on what to do beforehand. Our main activity: visiting a few of the Christmas markets.

Neither of us had any idea what Christmas markets really would be. It turned out that in Hamburg, it mainly revolved around lots of different types of food and drink, with drink meaning mostly Glühwein. With Lena’s pregnancy, she lost most of her appetite, so this was pretty much lost on her. We did eat some kale (boerenkool for the Dutchies), which was tasty (though not as tasty as in the Dutch cuisine).

And despite there being mostly food, we also found some nice stalls. We did have a good time.

Have some pictures of our adventures. 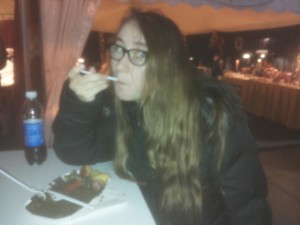 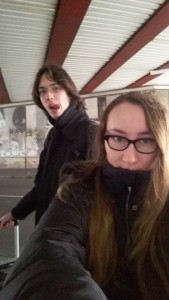 Though the center of Hamburg looks pretty nice, our hotel was in a bit of a slum part of the city. Here’s us walking to our hotel. 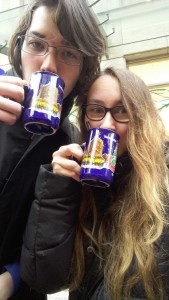 Glühwein! Not for Lena though, she had cacao.

I also came across this gem. 😀