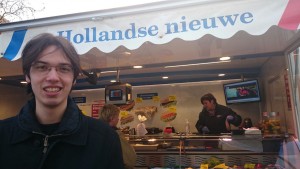 I find the concept of eating fish generally gross and raw fish doubly so. The idea that you’re eating something that used to swim in the sea in pretty much the same state is something I cannot get behind. The creature that stares at you with dead eyes from behind the fish stand’s counter is not something I would voluntarily put in my mouth. The occasional “kibbeling” I can eat without a problem, and for some strange reason, I’m very fond of shrimps. But herring, no thank you.

Enter Lena. When she found out I have never tasted herring, she immediately accused me of not being a proper Dutchman. She insisted I at least tried it once.

The video for the most part speaks for itself. It started with a faked convinced bite, followed by tasting the herring. To be honest, it wasn’t that bad. But then comes the realization of what it is I’m doing (if you look closely, you can see the exact moment I realize). Obviously, after that point, I was done eating.

So: was it bad? Not really. Would I do it again? Probably not. At least Lena is content now.