This is an idea that I’ve had since the end of last year. I love doing and experiencing new things, which is why I’m always looking for uncommon and peculiar opportunities. It’s often in the little things, like a new flavor of tea or chips, but I try some other things from time to time. My former housemates will remember my “crazy ideas”, such as attempting to bake an omelette in gravy (didn’t work), or blending “bitterballen” (tasted awful) or putting a banana between a “frikandel” (amazing).

Over the course of last year, I noticed I was not doing new things that often any more, and I wanted to change that. So I’ve been thinking about starting a video series called “I Never”, in which I log something I have never done before. The idea is to create an entry for each month and keep that up for at least a year.

I didn’t start on it in January like I imagined, but now that I have my own house, April seems like a good month to start. And seeing how I already have this blog, I figured I’d start it here. I can always expand to video if I want to.

So without further ado, “I have never slept in my own house”.

Even though I have this house, it’s not really fit to live in. But since we had a work party yesterday (which was awesome by the way), I decided to sleep here. I also had to get some more parts of my outfit, so I figured I’d go shop in Deventer and have dinner at home as well. 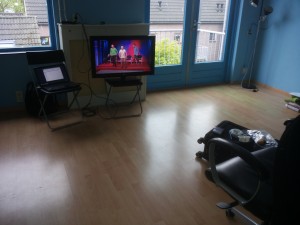 Well,  dinner is a big word. Lacking an oven, furnace, fridge, plates, cutlery and cups, I went with a luxurious meal of two petit pains and some salad. Then again, I didn’t have to do the dishes.

And this is my “bed”. It’s not the most comfortable for sleeping, but it did the trick.

So, what was it like? Mostly, very liberating. Just doing whatever I want feels pretty good. I had a lot of freedom already, but this is just that little bit extra that makes me feel like I own the place. Which I do.

Looking forward to my next night.