Almost a year ago, I wrote about my adventures in Germany. Two weeks ago, Lena, Baree and I headed off for another go at Galacon.

This year was different, of course. The biggest difference was a shift in our responsibilities. Last year, I managed about 18 people and 5 different cars in an attempt to get everyone a good trip to the convention. And on top of that, Lena, Moontune and I were responsible for staffing the Hearth’s Warming Con stand near the main entrance of the venue.

This year, we only managed our own car (and it was mostly Lena doing that, who did a very good job getting that sorted). And Hearth’s Warming Con did not have a full booth, but only a voting box (also great work from Lena) and some flyers. Ok, a lot of flyers. 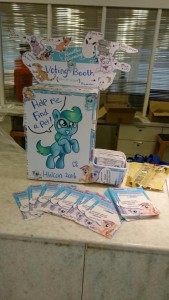 To make up for this sudden large amount of freedom that I would not be able to handle, I decided to apply as volunteer for the convention, with Lena joining me for volunteer duty. Lena got assigned to guard a set of panels, while my main task was to assist during the signing sessions, as well as some tasks at the registration booth in the early moments of the convention and some miscellaneous vendor help.

For me, as always, I liked being among people. Having played increasingly big roles in the conventions that I have attended, I have earned the privilege of experiencing that moment of “I recognize your face, but where did we meet again,” while for others I ran into them yet another time. I particularly enjoyed meeting and working with Stargaze and Sundance, whom I haven’t seen since Galacon 2014, and only for just a brief moment back then.

On the other hand,  I like that there’s always new people you meet at these big gatherings. Being a volunteer, you get to work with cool people, but as a signing session guard, I also got to meet some special guests,  specificallyJayson and Jocelan Thiessen, for whom I recorded the amount of signatures they gave out. We talked about various things and I learned that there is particularly good food in Vancouver. Remembered for later.

The absolute highlight this year, however, was the gala evening. Originally, I had a volunteer shift during that event, but Stargaze was so kind as to let me enjoy the evening with Lena. The performance of Michelle and BlackGryphon, which was good, but not as appropriate for a gala evening, was followed up by MLP-themed piano music.

Right then and there, for the first time ever, Lena and I danced. It may have appeared as shuffling while hugging to an outsider, but for me, none of that mattered. That night was our night and we were enjoying it to its fullest.

I realize this may be a bit of a chaotic I Never post, but it was just an awesome experience, especially when compared to last year’s Galacon.

I’m looking forward to our next con.

P.S. Lena wants me to mention our height difference. It is quite a gap, isn’t it? Not enough to stop me from loving her though ^^