As promised, a second post for October’s I never entry. And it even has pictures. So you’re in for a treat. Or a trick.

Halloween Fright Night at Walibi. As I was told, last Friday being the last day of the Fright Night event, it was going to be the scariest of the year. As I explained in my previous post, I was not looking forward to Halloween all that much. Of course, not spending it alone at home was a welcome opportunity, but it did play into my fear of fear.

So naturally, Friday morning I was pretty nervous about the whole ordeal. During the train ride, I got some distraction from a newspaper and after being picked from the station, another distraction from the back of the car sure was keeping my mind from thinking too far ahead.

Now, I’ll be honest. I was scared of some things. There were three things I avoided, and all three of them were roller coasters. But when the day passed and the evening started, there was really nothing I feared. I don’t know how or why, but literally none of the monsters scared me. In fact, I was quite giddy to go to the zombie-themed zone, because, well, I’m a huge zombie nerd. And I must say, they really made a cool environment.

The zombie maze was a bit of a let-down though. Mostly because it was not much of a maze, and because the zombie actors were almost all behind fences. I was kind of looking forward to sneaking around, trying to find the exit while also trying not to get spotted. Too bad.

The other scare zones were well-made too. The video game zone was awesome and I really liked the gateway to hell.

But the most important thing is that I had a lot of fun. For someone who is scared a lot, it’s actually very relaxing to not be scared at all while people around you run from fake demons.

Then finally, some pictures of the event.

The first is actually pretty scary. I mean, look at it. Comic Sans. 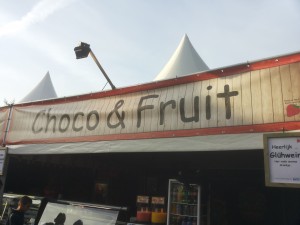 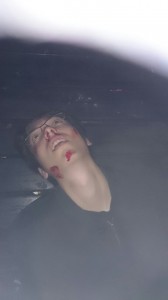 But that’s ok. I came back and joined some other zombies. 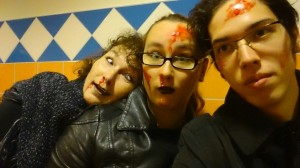 And I got some superpowers to boot. 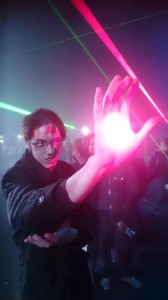 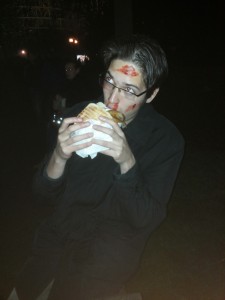 Ok, that wraps up October 2014. It was a strange month. But it was also a good month. I liked it.

See you in November!