A bit of background on this one: I mentioned the New Year’s party at Lena in my Turn of the Year entry. One of the key things during that party were the various onesies that certain attendants wore. We even drove to a nearby city center in search of more onesies for the party, but we failed in acquiring any more.

Last week, however, Lena and I drove to the Primark in Almere, your number 1 stop for onesies. Advertising aside, we managed to get ourselves a nice set: 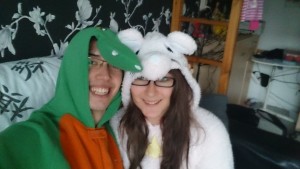 For those who can’t tell (and I can unfortunately not blame you), Lena has a mouse onesie, while I have a dinosaur one (no, it’s not a duck).

First impression: it’s comfy and easy to wear. Furthermore, it’s surprisingly warm. So warm actually, that I now turn the heater a few degrees lower. Given that these onesies are pretty cheap, that’s not that bad a deal.

But the best part about them is probably wearing them. Seeing how we are both crazy, we’ve worn our onesies outside quite a few times already. Right after buying them, we put them on while going to the McDonalds and an oriental shop in Almere. We’ve been to the Albert Heijn in Heerenveen in onesies twice already, once with Sylke in her own onesie. And we’ve been to IKEA and Beter Bed Hengelo in these.

Passer-by reactions were mixed. As expected, people were generally surprised. Most people looked at us oddly, or laughed to themselves. A few felt the need to make fun of our fun. But we’ve gotten a few compliments as well, and kids generally like us. There was this one cute kid at the IKEA who came up to us wearing a Toothless hoodie. Definitely worth it.

Curious? As I said, they’re relatively cheap at any Primark. And if you’re brave enough, you can join us on February 8 when we go see a movie in onesies.